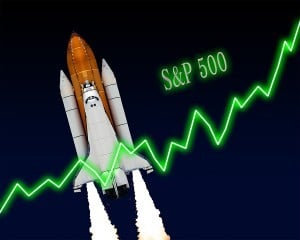 SP 500 index chart up US stock exchange. Elements of this image furnished by NASA.

The S&P 500 had a sluggish Tuesday. Energy shares were partly to blame for the worst performance S&P has seen in 3 weeks. Disappointing earnings caused stocks to drop as U.S. business equipment earnings declined in the month of December.

Early morning reports have stocks fluctuating greatly. An early morning rise has been offset by negative changes for the DJIA, S&P 500 and the NASDAQ.

Boeing (BA) beat quarterly profit estimates. Yahoo (NASDAQ:YHOO) broke news that the company would use its 15% share in Alibaba as a spinoff. The company plans to start “SpinCo” that holds the $40 billion worth of Alibaba stock. Yahoo expects the spinoff to be completed by the fourth quarter of 2015.

Tech giant, Apple (NASDAQ:AAPL), also bolstered markets after strong fourth quarter earnings. The company announce sales in the Chinese sector were up 70%. A net profit of $18 billion on the fiscal first quarter broke records. IPhone sales were behind the company’s surge. IPad sales dropped by 22% in 2014.

The company is also sitting on an estimated $142 billion dollars’ worth of cash reserves.

The S&P 500 added 11.07 points on Tuesday with technology being the best performing sector. Energy was the worst performer of the day.

The Dow Jones gained 89.07 points on the day due to strong earnings reports by Boeing. The company saw a 23% increase in profits during the fourth quarter and beat estimates. Shares of the company’s stock rose 4.3%. Cash flow estimates for 2015 are also up to $6.2 billion.

Apple is one company that investors can always depend on. The company, along with Boeing, should help level out the markets on Wednesday. Falling oil prices and companies yet to release their earnings reports may drop the S&P further into the red.