According to an allegedly leaked internal document, US mobile operator Sprint is set to kill device subsidies on two-year contracts to anyone opening a new account. Instead, the firm will push activations towards leasing and instalment plans.

The sales sheet was obtained by tech site Android Central, and states that subsidies will be restricted to people upgrading and customers who want to add a line onto existing accounts. The policy does not however apply to tablets, which are still eligible for two year contracts.

The decision by Sprint is in line with a general move by the mobile industry away from smartphone subsidies and incentives. For example, Verizon and T-Mobile have already scrapped contract pricing instead pushing more people to monthly payments, upgrade plans and leases. The US’ second-biggest operator, AT&T, will also end contract subsidies on Friday.

In August last year, Sprint launched its new iPhone Forever plan which provided Apple customers a straightforward upgrade path to the most recent hardware. In Sprint’s terms, customers must pay a premium each month as well as the standard wireless/data service fees. In return they become eligible for a brand new iPhone every year when they trade in an older model. The actual price depends on the level of service, handset memory size and other factors.

Here’s a screenshot of the leaked document, courtesy of Android Central: 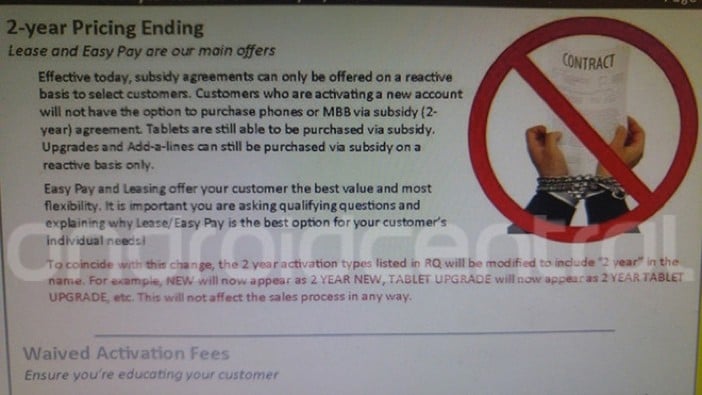 For mobile operators, the decision to move away from two-year contracts makes sense. Subsidies were at one time intended to attract customers into buying a new phone by offsetting the high entry price, with the operators recouping the money lost on hardware via the service fees. But now that smartphones like the iPhone are common, operators are moving towards instalment schemes, meaning that the hardware costs must on the whole be borne by the consumers.