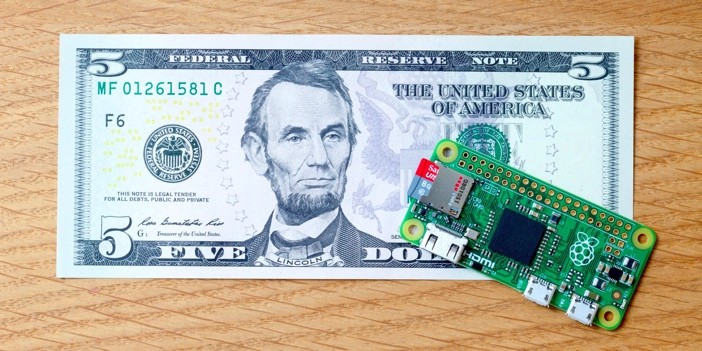 Raspberry Pi has just launched an incredibly small and cheap computer called the Raspberry Pi Zero, and it costs just $5.

The device actually has some fairly decent specifications for what it is, despite its almost unbelievably low price:

In order to use the computer however, users also need to add a screen, keyboard and mouse. It also runs the Linux-based Raspbian rather than any flavour of Microsoft Windows. Aside from that it works pretty much just like any other desktop computer in terms of the basic fundamentals.

The small size and price make the Raspberry Pi Zero ideal for hobbyists and those who want to build connected objects and systems, such as turning a house into a smart home, or for learning how to code. Previous versions of Raspberry Pi computers have already been used for these purposes, as well as in education.

“We’ve gone from the cost of four lattes to the cost of one latte”, says Raspberry Pi Trading CEO Eben Upton when he introduced the diminutive devices.

The company is even giving the computer away for free in “Magpi”, the official Raspberry Pi magazine. “We’re the first computer magazine ever to give away a computer as a cover gift”, says Upton.

The very first model of the Raspberry Pi launched back in 2012, with the company aiming to create low cost devices that would introduce people to computer science. Even though they have traditionally been aimed at youngsters and children, the computers are often used by hobbyists for their home-grown projects.

“Of all the things we do at Raspberry Pi, driving down the cost of computer hardware remains one of the most important”, says a company blog post about the Pi Zero. “Even in the developed world, a programmable computer is a luxury item for a lot of people, and every extra dollar that we ask someone to spend decreases the chance that they’ll choose to get involved”.