The government of Japan plans to start testing a system this summer that would allow foreign tourists to verify their ID and buy goods and services using only their fingerprint.

Before the 2020 Tokyo Olympic and Paralympic Games, Japan aims to prevent crime and reduce travellers’ stress by avoiding the need to carry credit cards and cash. The experiment planned for this year would allow the government to evaluate the system before making changes before the games.

The experiment is said to include fingerprint scanners at popular retailers in some of the country’s tourist hotspots, a total of 300 souvenir shops, restaurants, hotels and other venues. Under the government’s regulations however, a passport will still be needed to check into a hotel, although it would allow purchases to be made via your fingerprint during your visit.

In October of last year, the Huis Ten Bosch theme park in Nagasaki used a similar system and said it worked well according to a spokesperson:

“The system has been well received by customers, including those with children, since it saves them the trouble of taking their wallets out”.

Japan also plans to test a system for its own citizens that will allow them to withdraw cash from ATMs, in efforts to improve security and reduce fraud involving stolen cards. 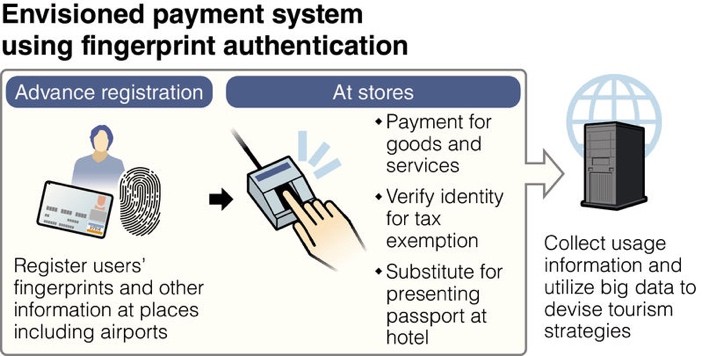