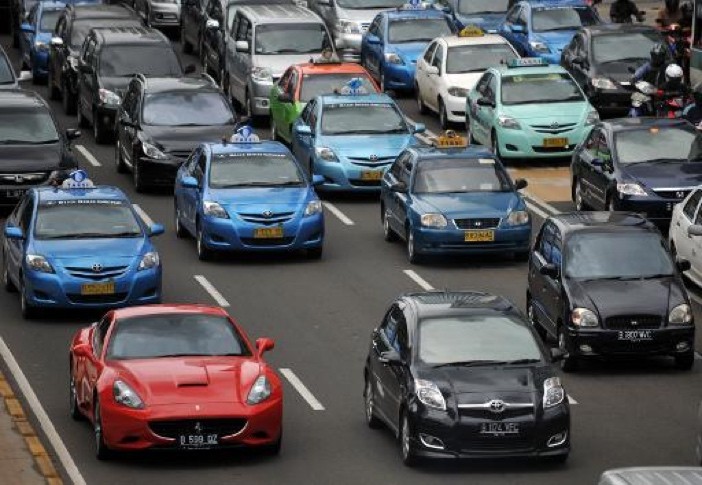 Thousands of angry taxi drivers will flood the Indonesian capital on Tuesday to protest against ride-hailing apps like Uber and Grab, as a price war intensifies.

The cheap taxis made possible by ride-sharing apps like Go-Jek, Grab and Uber has made regular pick up and drop off taxis unprofitable, threatening Indonesia’s top taxi firms PT Blue Bird and Express Transindo Utama, according to a report by Reuters.

“We are fighting to make sure everyone is treated fairly and there aren’t any players disadvantaged by these apps”.

The country’s Transportation Ministry has requested that taxi-hailing apps should be banned as they are not considered registered public transport. But the Communications Ministry, which oversees the operators of such apps, says the firms can continue to operate.

Nasihin, a taxi driver for Express, said he used to earn about 250,000 rupiah ($20) a day in salary before the ride-hailing apps gained in popularity, but now struggles to make an income.

“Tomorrow, I have to go to the protest because what they are doing is illegal”, he said. “Taxi drivers are getting very angry”.

The mobile apps have caused a huge stir in the local market, resulting in a price war and forcing diversification away from unprofitable taxis and instead to motorcycle taxis.

Go-Jek and Grab drivers say they regularly offer rides at below cost to gain market share. The two private held companies declined to provide details on pricing and their financial performances.

“A price war is not unusual for the introduction of a businesses like this … as promotions are huge to seize market share”, said Patrick Walujo, co-founder of private equity firm Northstar Group, one of three investment companies that have together provided more than $200 million in funding to Go-Jek.

“Perhaps Grab is hoping it can squeeze us. The reality is that because we offer multiple services and products our drivers generate more revenues, and our investors understand that”.

Go-Jek has limited a motorbike ride at 15,000 rupiah ($1.15) anywhere in Jakarta. Last week, Grab gave first-time users up to twenty free rides. Both firms say they have the biggest share of the motorcycle taxi business in the city of ten million people.

“This is a growth stage where we really focus on expanding the market by investing to reach a large number of customers, so we can get large volumes”, the managing director of Grab, Ridzki Kramadibrata, told Reuters.