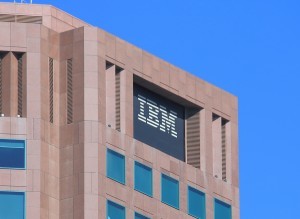 It is a sad commentary on how brutally efficient the stock market can be when a company stock rises because of rumors that it will lay off employees. IBM (NYSE:IBM) stock has been rising based on rumors circulating through the market that it’s going to be cutting staff. Estimates regarding the size of the layoff were originally pegged at around 118,000 people. Thankfully, according to TechCrunch, this is not the case.

Think about it, if IBM was seriously thinking of laying off 118,000 people, that would amount to 26% of its total workforce. While not impossible, such a massive layoff can dramatically disrupt IBM’s daily operations. Thankfully, according to TechCrunch, the number will be closer to around 11,000 to 12,000 people. While one person losing his or her job is a tragedy, you have to admit that the 11,000 to 12,000 number sounds much better than the rumored 118,000 reduction in workforce.
Why does the market seemingly reward rumors of massive layoffs? There are many reasons, but it all boils down to company decisiveness. The market rewards decisive companies that make the necessary and often painful changes needed to either escape an unpleasant situation or seize an opportunity. The market isn’t dumb. The market knows that IBM has been struggling for the past 11 quarters. The market understands that IBM is operating in a quickly-changing technology landscape.
Unfortunately, key parts of IBM’s overall strategy are outdated. They made sense ten years ago, but they don’t make much sense now. It’s not like IBM has been caught completely flat-footed by recent changes in software and the technology service preferences of its customers. IBM has been acquiring cloud-based companies. It has refocused itself on software as a service opportunities. These are all positive moves. The only remaining question is whether IBM is moving fast enough and incorporating these acquisitions smoothly enough.