Trending
You are at:Home»Capital Markets»Greece Is About to Run Out of Money and It Is Not Going to Make Much of a Difference
By Jacob Maslow on March 30, 2015 Capital Markets 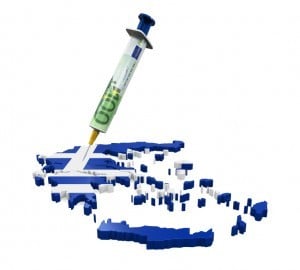 Watching the Greek drama in the Eurozone unfold, it is pretty much like being in a car and watching your car slam into a wall in slow motion. You know exactly what is going to happen. You know that it is really a waste of time and emotional energy to worry about. It is going to happen. You really don’t have much choice over the matter. It is not like you have a lot of options on the table.

The reality is that the Greek government simply cannot get out of its spending habits. Moreover, there is no political pressure on the ground for real austerity measures so that Greece can avoid running out of money. Greece is eventually going to run out of money and it is going to run back to Brussels with its hat in its hand for another bailout.

The powers-that-be, meaning the Germans, are sick and tired of bailing Greece out. Unfortunately, Germany has only itself to blame. Germany, as you know, is the primary beneficiary of the European monetary union. The biggest losers are Mediterranean countries.

There is a big cultural difference, at least as far as money is concerned, between Mediterranean countries and cold northern countries. Some of the best managed economies, as far as savings and fiscal efficiency are concerned, are in colder countries. This is one particular culture clash that the geniuses behind the European monetary union didn’t consider.

The only real solution which nobody wants to touch is to give up a large chunk of fiscal sovereignty for the European union to exist. Its current members want their cakes and eat it too. They want their political sovereignty, but at the same time, they want monetary union. That is not going to work, and Greece is just the tip of the iceberg. The whole European union experiment will finally fall apart once Italy starts going under, and Spain right after it.