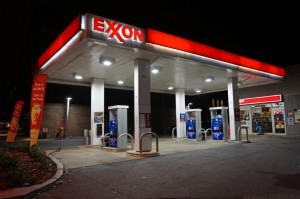 Now that oil has crashed more than 50%, it’s very easy to think that a lot of oil companies are simply cutting back and just waiting to ride out this depressed price environment. It’s tempting to think that a lot of them are just completely held hostages by low prices and are just biding their time. They’re just waiting for supplies to drop to a manageable level while global demand heats up due to an improving global economy. If that is the game plan of global petroleum giants, then that’s not much of a game plan. They’ll be waiting for a long time.

The good news is judging by the actions of oil giant, Exxon, it appears that many of the bigger players have a solid strategy for handling a low petroleum price environment. Exxon Mobil Corporation (NYSE:XOM) is the world’s largest public oil company. Its actions give us a clear view of proactive strategies that other oil giants might be taking in light of what looks like a prolonged low oil price market.

First, it’s cutting back on its capital expenditures. In 2015, it’s projecting to spend only $34 billion. This marks a 12% reduction compared to its 2014 budget.

Moreover, it’s looking to focus on upstream spending instead of downstream spending. This means it’s going to be negotiating a lot of oil service costs. This can be a serious problem for big oil companies like Schlumberger and Halliburton.

Another thing Exxon is doing is eliminating acquisitions entirely. This is a very interesting move because for the longest time, a lot of big oil companies would simply buy growth instead of exploring fields that they already have rights to.

Finally, according to analysts focused on Exxon, the company is going to be focusing primarily on shale growth. They feel that in these areas, Exxon has a lot of operational efficiencies. This can lead to a further increase in the paradox of US oil production. In the United States, it seems that the more oil rigs are decommissioned, the more oil is produced. Expect this higher focus on efficiency to produce more of the same.

How to Invest Your Money if You Don’t Trust Stocks?