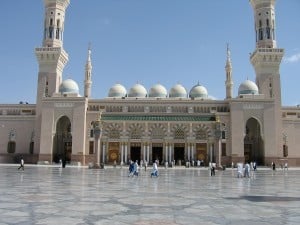 This is a view from the outside of the Prophet’s Mosque and shows one of the main entrances into the building. The photo shows the huge scale of the building. It has the capacity to house up to 800000 worshippers at any one time.

Thanks to its effort to pummel North American shale and tar sands oil producers’ market share, the price of global oil has fallen by half. This means less revenues for the Saudi Kingdom and more deficit funding for its generous social. The Kingdom can’t continue to operate in the red for too long. By saying that Saudi Arabia won’t deviate from the status quo, new King Salman is saying that it will continue to play the high stakes game of chicken with its finances. Should certain external factors play out, this might be one game the House of Saud can lose on-big time.
What can possibly happen? Well, there might be a full-blown half-decade recession which could torpedo oil prices. Saudi Arabia might get destabilized by the same social pressures that put its neighbors Syria, Egypt, Tunisia, and Libya into a tailspin. Indeed, part of the reason Saudi Arabia has such a generous social welfare budget and heavily subsidized society is the containment of any Arab Spring-type revolt breaking out on Saudi soil. The government has gone the extra mile to reassure the local native Arab population reeling from unemployment, low incomes, and increasing income inequality. Its efforts at “Saudization’-deporting undocumented workers and realigning the job market to benefit more locals is just one example. The big question still remains though: will all this be enough to contain the social volcano Saudi Arabia is sitting on?