Most people consider virtual reality (VR) as something that involves buying a headset and using to play games or watch 360 degree movies. But a new facility in Australia called Zero Latency opened today in Melbourne and goes against the preconceived ideas of what virtual reality is.

Zero Latency wants to be a place where anyone can experience virtual reality without having to buy an expensive headset and a high end PC.

The team that built the facility spent three years working on the technology which is now ready to roll out to the public.

The virtual reality headset itself makes up the main part of the system, which is an Oculus Rift DK2 – the reason that was used was so the team didn’t have to build their own headset, but it’s the rest of the system that sets the experience apart. 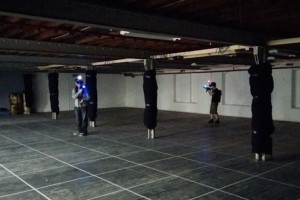 Using the VR at the facility is different to running the same kit at home. Players are suited up in the gear which includes a backpack that houses an Alienware Alpha PC to render the virtual world. Players also carry a ‘weapon’ to make the whole thing feel more real. Players move around the 4,300 square foot warehouse with PlayStation Eye cameras tracking their movement through the physical world, which is then translated into the virtual world.

That is how it’s really distinct from the home VR experience – as most people don’t have such a wide open space where they can move around without tripping over.

In terms of the game itself, players must blast zombies over several different locations.

Tickets are available on the company’s website for $88 AUD. That allows 50 minutes of time in the zombie-ridden world with up to 6 players taking part…