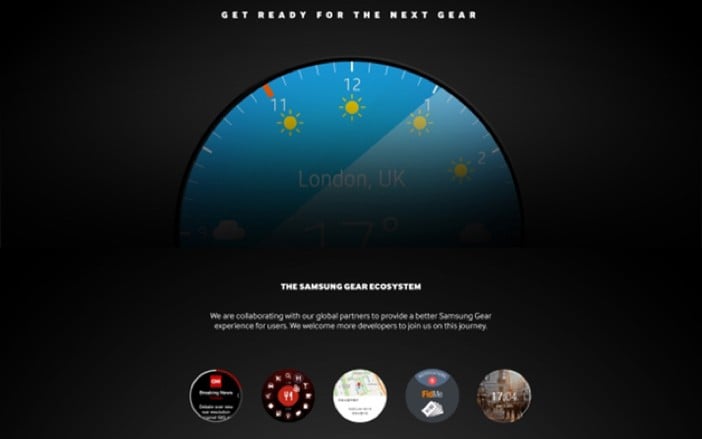 Samsung has just teased with a hint that it’s about to launch a new version its Gear smartwatch, revealed on the day that the Apple Watch finally went on sale.

Samsung plans a round Gear smartwatch

The South Korean electronics company showed off images on its official blog of a smartwatch with a round face, which would of course be the first round watch for Samsung. They also named various partners such as Baidu, Yelp and CNN.

Samsung said that it will release a special software development kit (SDK) for third-party developers ahead of the device’s launch.

The blog post came just as the Apple Watch went on sale, without the usual fanfare of the company’s products – simply because the Apple Watch is currently limited to online ordering only in the face of severe supply constraints.

Apple’s smartwatch is expected to sell much better than any other smartwatch to date, with IHS predicting around 19 million Apple Watches sold this year, more than five times the number of all smartwatches shipped globally in 2014.

Samsung has in fact released six smartwatches since 2013, to try and build a lead in the burgeoning market, but sales have been very lacklustre to say the least. IHS estimates that Samsung accounted for around 1 million of the 3.6 million smartwatches that shipped in 2014.

The South Korean company didn’t provide any other details on the new Gear watch, such as when it would go on sale, but the head of the company’s mobile unit said in April that Samsung was set to launch new products in the near future.