Trending
You are at:Home»Diversified Tech»Apple to invest $2 billion in eco-friendly Arizona data centre
By Larry Banks on February 4, 2015 Diversified Tech

The data centre previously which Apple leased to GT Advanced Technologies (GTA) will now be transformed into a global command centre, and will employ more than 140 full time people thanks to a huge $2 billion investment by the Cupertino-based company.

The plant was previously being used to manufacture sapphire for Apple to use in products such as the iPhone and iPad, but GT Advanced filed for bankruptcy last year and claimed Apple had imposed “oppressive” terms and conditions.

According to the Associated Press the data centre will now serve as the control centre for Apple’s other four centres located in the U.S.

“This multi-billion dollar project is one of the largest investments we’ve ever made, and when completed it will add over 600 engineering and construction jobs to the more than one million jobs Apple has already created in the U.S.”, Apple said in a statement, adding “like all Apple data centers, it will be powered by 100 percent renewable energy, much of which will come from a new local solar farm”.

The new data centre will commence construction in late 2016, however the facility currently still contains the sapphire furnaces which GTAT and Apple purchased – now being liquidated as part of the bankruptcy proceedings.

The new facility will be able to power more than 14,500 homes through the generation of 70 megawatts of solar power.

“This is a great day for Arizona, and we have moved rapidly to make this happen and take advantage of Apple’s interest in our state”, said Arizona Gov. Doug Ducey. “Apple is by far one of the most innovative and successful companies in the world. Its decision to bring this new facility to Mesa is a huge win for Arizona and a high testament to our business-friendly climate and talented workforce.” 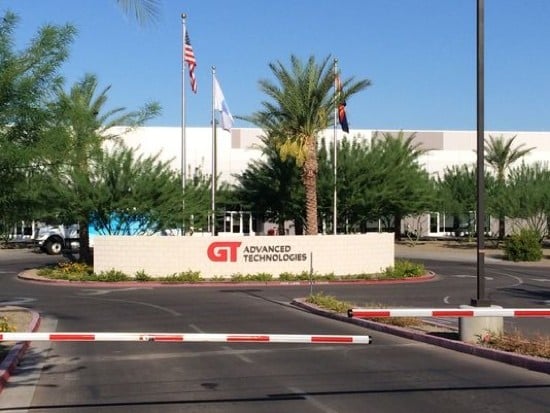 Apple has already built several massive data centres on both sides of the U.S., with its largest facilities in Maiden, North Carolina and Reno, Nevada. There are smaller facilities located in Prineville, Oregon and Newark, California.

The Oregon facility is one of the most interesting as it’s powered by a hydroelectric plant and wind energy, whereas the California facility employs wind energy and the Nevada one both solar and geothermal energy. The North Carolina centre is home to the country’s largest privately-owned solar farm.

Initial plans for the Mesa plant came to light in 2013, announced by Governor Jan Brewer who was reportedly thrilled to have Apple investing in the state. The build was finished last year, complete with some renewable energy and an eco-friendly power station. The facility was not in fact owned by GT Advanced, but leased by Apple as part of a $578 investment and contract for sapphire manufacturing. However, the deal broke down after GT couldn’t meet Apple’s demands, which it called ‘oppressive’.

Since GT’s bankruptcy proceedings, it axed more than 700 jobs from the project, forcing Apple to issue a statement saying that it was “focused on preserving jobs in Arizona following GT’s surprising decision” and that it plans to work with state and local officials during the transition period.

It is not certain which other suppliers Apple sources sapphire from, but the material is used in the Touch ID button and camera lens covers on some of its mobile and tablet products. At least the Arizona facility will serve a new purpose in future, powered by 100% green energy. For that, Apple has to be applauded.