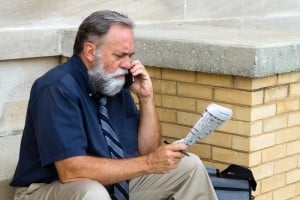 Mature unemployed salesman makes a call on his cell phone to reply to a advertisement for a want ad job in the newspaper.

Unemployment, as an economic concept, is fairly easy to define. The unemployment rate is the percentage of Americans of working age who want to get a job but cannot get a job. Consequently, these people don’t have jobs. This is the standard textbook definition of unemployment in the United States.

However, a growing chorus of critics have a serious problem with this definition. This definition paints an unnecessarily rosy picture of the health of the U.S. job market. No less than acclaimed company Gallop Group takes exception to the official jobless benchmark. Gallop is saying that the U.S. jobs figure should also factor in underemployment.

There are many cases of people with advanced degrees who are waiting tables in the United States. We are talking about those with law degrees, PHDs, or master’s degrees from sciences to mathematics. These are people who are working ten hours per week, when they wish they could be working 40 hours per week. Of course, they wish they would be working within their fields. Unfortunately, the jobs just aren’t there.

Gallop’s beef with the government’s rosy jobless numbers is that the painful reality of underemployment is not reflected in those numbers. Gallop issued a very strong opinion piece on its website calling the government’s unemployment figures “a big lie”. There is a lot of truth to Gallop’s argument.

There is a lot of pain currently being felt by workers in the United States. These are individuals who are highly skilled, highly talented, and have solid experience. For some reason or another, they are forced to settle for jobs that aren’t full time and jobs that pay them nowhere close to what they should be earning. Expect this level of discontent to bubble up eventually, unless it is dealt with soon.